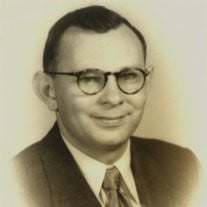 Rev. Dan Bates, 88, died Wednesday March 6, 2013 at Jackson Madison Co. General Hospital. He was born March 25, 1924 in Hillsdale, MI the son of the late Robert Bates and Maude Fairbanks Bates. He graduated from Ben Franklin High School in Cedar Rapids, IA in 1942; graduated from Union University with a BA in 1946 and from Southwestern Seminary with a Master of Religious Education in 1948. He met his future wife of 65 years Martha Frances Rainey at West Jackson Baptist Church in 1942 and they were married June 3, 1945 at West Jackson by Dr. R.E. Guy. Dan began his career as Baptist Student Union Director at the University of Florida, then Arkansas. He then served as Minister of Education in churches in Tennessee, Virginia, Mississippi and North Carolina. He was a member of the Exchange Club since 1955 and received the Distinguished Staff Award from Union University in 1988. Rev. Dan’s advice on how to live a happy life “Be active in church, Love your family and treat all people with respect.” He is survived by his son Robert Frank “Bobby” Bates and wife Sue Gilmore Bates of Wildersville, TN; a daughter Diane Deschenes and husband Paul of Jackson, TN; Two grandchildren, Daniel and Anna Marie Deschenes of Jackson, TN and several nieces and nephews. He was preceded in death by his wife Martha Frances (Rainey) Bates, grandson Gabriel Bates, brothers Erwin E., Austin F. both of MI and sister Vera L. Martin of IN. Memorials may be directed to the Carl Pekins Center Center for the Prevention of Child Abuse P.O. Box 447 Jackson, TN 38302. Funeral services will be held at 11:30 AM Saturday, March 9, 2013 in the chapel of Arrington Funeral Directors with Rev. Lonnie Sanders officiating. Entombment will follow in Highland Memorial Gardens Mausoleum. The family will be receiving friends on Saturday, March 9, 2013 from 10:00 AM until 11:30 AM at Arrington Funeral Directors 148 W. University Parkway, 731/668-1111 www.arringtonfuneralgroup.com.

The family of Rev. Arlo Dan Bates created this Life Tributes page to make it easy to share your memories.