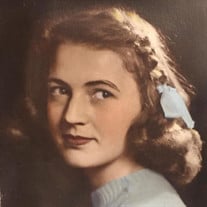 Arianna Thomason Robins, affectionately known as “Sissy”, died peacefully on January 12, 2021 at Jackson-Madison County General Hospital in Jackson, Tennessee at the age of 90. She was born June 19, 1930 in Baton Rouge, Louisiana, the daughter of Jasper Lee and Arianna Abernathy Thomason. Sissy spent many years in McKenzie, Tennessee before moving to Jackson and graduated from Jackson High School and attended Union University. It was in Jackson that she met the love of her life, Frank Robins, and eloped to Corinth, Mississippi on January 5, 1952. They were blessed with four children, seven grandchildren and five great-great grandchildren. Totally devoted to each other, Sissy and Frank were married for 69 years, and their marriage was a testament to their love for each other. Sissy was a stay-at-home mom until she decided to work in the medical field as a bookkeeper. She had an impeccable talent for detail and was an expert at Scrabble and crossword puzzles. She enjoyed gardening and was blessed with a tender heart, loving all animals. Sissy and Frank were members of the West Tennessee Seniors Golf Association. Sissy is survived by her husband Frank Robins; daughters Sally Franks of Birmingham, Alabama and Arianna Lynn Hahn of Gulf Breeze, Florida; sons Richard (Rick) of Humboldt, Tennessee, and Greg Robins of Jackson; brother Alfred Thomason of Nashville, Tennessee; seven grandchildren; five great-great grandchildren; and numerous nieces and nephews. Prayers for strength are appreciated for the family as they bear the loss of their much beloved wife, mother and grandmother. Due to Covid-19, no services are planned. Arrington Funeral Directors 148 W University Parkway Jackson, TN 38305 731-668-1111 arringtonfuneralgroup.com.

The family of Arianna Thomason "Sissy" Robins created this Life Tributes page to make it easy to share your memories.