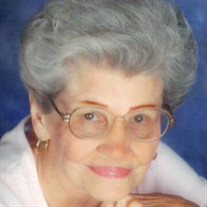 On May 11th, 1923 the Lord sent one of his angels, Anne Lasley Shaw, to live on this Earth. She went Home to be with her Jesus on Thanksgiving Day, Thursday, November 22, 2018. Friends and family will gather for a visitation at Arrington Funeral Directors of Jackson, Tennessee on Tuesday, November 27, 2018 from 4:00 pm to 6:00 pm and Wednesday from 12:30pm until her Homegoing Celebration at 2:00 pm at Forest Heights United Methodist Church located at 863 West Forest Avenue in Jackson, Tennessee with graveside services following at Ridgecrest Cemetery located 200 Ridgecrest Rd. Arrangements are entrusted to Arrington Funeral Directors at 148 W. University Parkway in Jackson, Tennessee. Pallbearers will be Jordan Haskins, Lee Haskins, Tommy Haskins, Dan Lasley, Greg Lasley and Ronnie Lasley. Honorary pallbearers are Gary Deaton, Norwood Jones, Bob Laman, Jon Laman, Jonathan Laman, Bill Lasley, Michael Russo, W. Brooks Shaw, Reggie Smith and Lawrence Taylor. She is survived by her son and his wife, Clark and Juanita Shaw, her daughter Deborah Laman and husband Jon, her adoring grandchildren – Jonathan Laman and his wife Andrea, Jennifer Laman Russo and her husband Michael, Elizabeth Shaw, Brooks Shaw and his wife Megan, and four great grandchildren – Margo and Jack and Skylar and Gabriel. Her fifth great-grandchild will be welcomed in the family in June 2019. A lifelong Jacksonian, Anne was the daughter of T. Ray and Annie Day Lasley. A close knit family, her brothers and sisters include Eleanor Rose Haskins, Sarah Ralls, Bill Lasley and three deceased brothers, Dr. Kirby Lasley, Edwin Lasley and Raymond Lasley, Jr. Anne attended College Street School and later Huntersville School from 4th grade through graduation. She was a student at Lambuth College for two years during World War II then worked at the Y-12 Facility at Oak Ridge, Tennessee. She graduated from West Tennessee Business College and worked for her father at Ray Lasley Real Estate. Anne grew up in Hays Avenue Methodist Church and in the 1950’s her family gave the land to found Forest Heights United Methodist Church where she was a devoted member the rest of her life. She loved being a member of the Wesley Bible Class. She accepted Christ as her Savior in 1973. Her greatest joy came from loving and serving the Lord, her family and her friends. For nine years she was in the Explorers Bible Study and honored to be a teacher for three. She met the love of her life, Brooks Shaw, while working in Downtown Jackson and they married in June of 1953. They had two children, Clark and Deborah Anne. Brooks was the president of Kelly Foods canned meat company on Airways for many years and they founded Brooks Shaw’s Old Country Store in 1965. Sadly, Brooks passed away in 1971 from his 4th heart attack. Finding herself a single parent at age 47, Anne kept the family business which became a landmark restaurant and destination in Jackson and the region. Brooks Shaw & Son Old Country Store relocated in 1978 when the company developed Casey Jones Village. The Village has since welcomed millions of visitors both locally and from across the nation and around the world. She thoroughly enjoyed working in the company through the years and served as the Chairman of the Board and in later years Chairman of the Board Emeritus. The family would like to thank the caring staff of the Old Country Store for all of their love and support. Anne also served with great devotion in countless leadership positions at Forest Heights United Methodist Church through the years and dearly loved her church family. With a servant’s heart, she ministered in the children’s ministry, women’s ministry and Outreach committee that helped build Habitat for Humanity homes. She often volunteered at the Soup Kitchen, visited shut ins, and founded a Prayer Chain ministry with her sister Eleanor Rose among other contributions too numerous to mention. She worked as a volunteer with the Boy Scouts of America and the Girl Scouts of America when her children were growing up. Anne blessed others through the hundreds of cards she sent with her card ministry. She served for many years on the Board of Directors of Birth Choice of Jackson and the West Tennessee Healthcare Foundation. On the occasion of her 90th birthday, May 11th, 2013 it was declared Anne Shaw Day by the City of Jackson, Tennessee in her honor. The family wishes to honor the devotion of family members with special thanks to her sister Eleanor Rose Haskins, niece Judy Haskins and nephew Tommy Haskins who were not only next door neighbors on the family farm but who often took special care of Anne’s needs with thousands of selfless acts of love through the years. The family would also like to acknowledge her personal caregivers including Joella Brown, Peggy Chism and Carolyn Wilbourn. Joella was with her almost daily the past few years and became a devoted friend to Mother and beloved member of our family. Thank you to Jennie Spraggins at Regency Retirement Village and everyone at Regency including Lisa Mabon, LeKesa Borner, Sylvia Livingston, Kathy Yancy, Mona Carpenter, Ruby Hill, Ravin Harmon, Stephanie Huntington, and Sheri Ridell, long term caregivers there. Lastly, thank you to the wonderful caregivers from Home Instead Senior Care, Connie Morrow, Stephanie Wise, Terricia Jones, the Chaplains at Englewood Baptist Church and the saints at Hospice of West Tennessee. She was so appreciative of all the cards, letters and calls, personal visits by family and friends and, most importantly, the prayers lifted up for her. In lieu of flowers, memorials can be directed to Birth Choice of Jackson or to the non-profit The Farm At Casey Jones Village through the West Tennessee Healthcare Foundation’s Historic Farm Preservation and Education Fund. Arrington Funeral Directors, 148 W. University Parkway, Jackson, TN 38305.731.668.1111.www.arringtonfuneralgroup.com.

On May 11th, 1923 the Lord sent one of his angels, Anne Lasley Shaw, to live on this Earth. She went Home to be with her Jesus on Thanksgiving Day, Thursday, November 22, 2018. Friends and family will gather for a visitation at Arrington Funeral... View Obituary & Service Information

The family of Anne Lasley Shaw created this Life Tributes page to make it easy to share your memories.