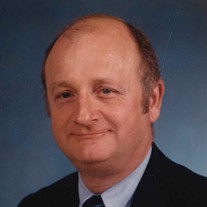 Andrew “Andy” Robinson Andrew “Andy” Jordan Robinson, passed away on Tuesday, January 31, 2017, at the West Tennessee Veteran’s Home in Humboldt, TN, at the age of 81. He was the son of the late Andrew and Helen Zeller Robinson. He is survived by his wife of 56 years, Nancy Hudson Robinson, and sons, Mark Robinson (Sharon), and David Robinson (Tammie), and a very special grandson, Blake Andrew Robinson. He is also survived by two sisters, Charmine Lee (Joe), and Katherine Webb (Jimmy), and a brother, Edward Robinson. He was preceded in death by his sister, Merita Upton. Mr. Robinson graduated from J.B. Young High School in 1953. He served in the Naval Reserve, and also for 4 years in the Air Force. He served on the Madison County School Board for 7 years. He was retired from Sears. He was an active member of Brown’s United Methodist Church. SERVICES: Funeral services will be held at 2:00 PM on Saturday, February 4, 2017, in the chapel of Arrington Funeral Directors with Rev. Steven Douglas and Rev. Larry Kendrick officiating. Visitation will be held from 12:00 PM – 2:00 PM, prior to the service. Pallbearers to serve are Mark Robinson, David Robinson, Blake Robinson, Richard Hudson, Richard Webb and Matthew Upton. The family has requested in lieu of flowers that memorials be directed to Brown’s United Methodist Church. 101 McLeary Rd, Jackson, TN 38301. Arrington Funeral Directors, 148 W. University Parkway 731-668-1111 www.arringtonfuneralgroup.com

The family of Mr. Andrew "Andy" Jordan Robinson Jr. created this Life Tributes page to make it easy to share your memories.