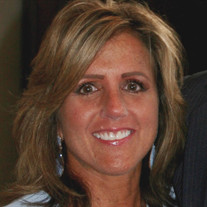 Allison Tanner West, a current Alabamian who originally hailed from Tennessee, passed away on Tuesday, September 7th, 2021, at the Huntsville Hospital, Huntsville, AL after a brief illness. Allison was born on Monday, January 9th, 1961, in Memphis, TN, to Wayne Hayes and Barbara Barton Tanner, and sister, Lee Anne. They moved several times around the Memphis area during her school-age years. At one point, she attended Riverdale Elementary School, where she met her lifelong best friend, Dede. Allison graduated in 1979 from Briarcrest High School and went on to attend Blue Mountain College and Memphis State (now University of Memphis, but she still called it Memphis State, which she joked “showed her age”). After graduation, she worked hard utilizing her business degree and excelled at every job she had. She attended Kirby Woods Baptist Church after college, where she met her future husband, Mark West. Mark and Allison married on June 7th, 1986, and began their life together. They lived briefly in Lexington, Kentucky for Mark’s residency, then moved to Jackson, TN, where they had and raised their three children. Allison gave up her career to stay at home and raise their children, which she always shared that she “was proud she was able to do so.” Anyone who knew Allison knew that her children were the center of her universe. She was the ultimate “momma bear”—so much so that she and Mark moved to Madison, AL, to be close to their two granddaughters, Austen Juliana and Emma Hayes. She became a member of the Madison Homemakers Club, and loved gardening, visiting with family and friends, and playing with her granddaughters. Allison was preceded in death by her father. She is survived by her husband and three children; her son-in-law and two granddaughters; her mother and sister; and multiple loving extended family members and in-laws. SERVICE: A Memorial Service will be Saturday, September 18th, 2021, at 2:00PM in the chapel of Arrington Funeral Directors in Jackson, TN with Dr. Steve Gaines officiating. Visitation with family and friends will be from 12:30 until service time. The service will be webcast live via arringtonfuneralgroup.com. In lieu of flowers, please send memorial donations to The Care Center, 351 N. Liberty Street, Jackson, TN 38305 or online at carecenterofjackson.org/support-us or the Gary Sinise Foundation, P.O. Box 368, Woodland Hills, CA 91365 or online at garysinisefoundation.org. Arrington Funeral Directors 148 W. University Parkway Jackson, TN 38305 731-668-1111 www.arringtonfuneralgroup.com

The family of Allison Tanner West created this Life Tributes page to make it easy to share your memories.