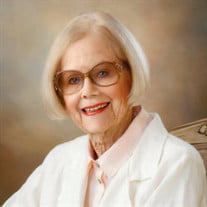 Alice Adams was enrolled in her first piano class by her adoptive parents when she was just six years old and living in Memphis, Tennessee. No one could have known this single event would determine the path Alice’s life would follow and that she would touch countless lives through her music and the teaching of others over the ensuing years. Four years later, at the age of ten, Alice presented her first solo recital at Memphis’ Beethoven Club. Alice and her parents moved to Humboldt shortly thereafter and she began studying piano with several noted area music teachers. One of her teachers studied at the American Conservatory in Chicago while another was the head of the piano department at Lambuth College, where Alice continued her education. During her later studies, Alice developed a love for teaching and began to share her passion and talents with others in a small Humboldt studio she operated until this past summer. Many of her students, some travelling long distances to attend her sessions, have garnered prestige and honors, winning competitions across our country. Some students have performed at Carnegie Hall in New York City, while others have gone on to play with various symphony orchestras. One of her students, a nine-year old, won the elementary division of a world competition at the Kennedy Center in Washington, D.C., while yet another will perform with the Jackson Symphony this spring. Alice was married to Ewing Jackson, a local high school English teacher, who also enjoyed playing the piano. Together, Ewing and Alice composed the song “Christmas Time” as a gift to the musical heritage of the church. Alice and Ewing were married for fifty-two years. Fifty-seven years ago, in spite of her extremely busy schedule, Alice agreed to serve one Sunday as a fill-in pianist and organist at the Humboldt First Presbyterian Church (now known as the First Evangelical Presbyterian Church) and then continued to serve this congregation as the pianist and organist until this past summer. Every Sunday and on special occasions, especially Christmas Eve, Alice raised this church’s music to a wonderful and moving level. No one left a church service without being touched by her music and knowing that she was one of God’s “special angels”. Alice has been the recipient of many awards and recognitions, including: “Tennessee Teacher of the Year” the “Governor’s Plaque for outstanding work”, the “National Guild of Piano Teachers” - Hall of Fame”, and the “National Music Teachers Association” – Fellow. Her most recent honor came when she was elected to the Humboldt Hall of Fame. Several years ago, following the conclusion of a Sunday morning hymn performed by Alice and the church choir, a guest minister stood silently before the congregation for a full minute, before remarking, “That is exactly how I imagined Heaven would sound!” We cannot think of a higher compliment from this minister or a more fitting tribute to Alice’s service to others, her devotion to the members of this church and her students, and her dedication to excellence in music. We love and miss Alice dearly, but her music will resonate within us for all of our lives. SERVICES: A funeral service will be held at 2:00 PM Saturday, January 16, 2016 at First Evangelical Presbyterian Church with, Rev. Chuck Estes assisted by Rev. Herb Adams officiating. Burial will follow in Antioch Cemetery. Pallbearers will be Bob Graning, Tony McCaslin, Bob Patrick, Butch Smallwood, Howard Hamilton and Murry Greer. Honorary pallbearers will be her former students that she taught and are asked to sit together as a group The family will be receiving friends at First Evangelical Presbyterian Church from 12:30 PM until 2:00 PM on Saturday prior to the service. The family is requesting that memorial contributions be directed to First Evangelical Presbyterian Church, 1528 Presbyterian Drive Humboldt, TN 38343. Arrington Funeral Directors, 148 W. University Parkway, 668-1111 www.arringtonfuneralgroup.com

Alice Adams was enrolled in her first piano class by her adoptive parents when she was just six years old and living in Memphis, Tennessee. No one could have known this single event would determine the path Alice&#8217;s life would follow and... View Obituary & Service Information

The family of Alice Adams Jackson created this Life Tributes page to make it easy to share your memories.

Alice Adams was enrolled in her first piano class by her adoptive...